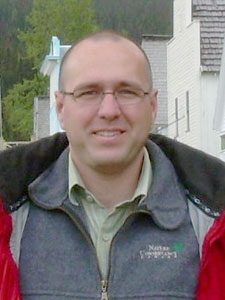 Dave Nicolson is a geographic consultant who specializes in the use of geospatial data to support land and marine planning. Over the past 20 years, he has worked on projects for the Federal government, BC Provincial government, municipal governments, industry, First Nations, ENGOs and academia. His work has allowed him to interact extensively with, and in many cases necessitated the creation of, spatial data representing marine uses and values for Canada’s Pacific Waters.

Mr. Nicolson was co‐editor of Taking Nature’s Pulse: The Status of Biodiversity in BC, and closely involved in the Marxan Good Practices Handbook. He is Project Manager for the BC Marine Conservation Analysis. He has a Bachelor of Science in Geography (resource planning) and a Masters Certificate in Project Management – both from the University of Victoria. Mr. Nicolson has been a Director of PacMARA since 2005.