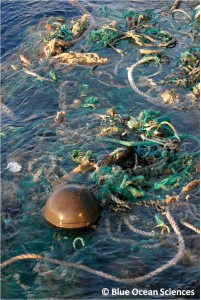 As a marine ecologist with an interest in economics and policy, I find myself drawn to studying marine debris and its consequences to ocean ecosystems and beyond. With Blue Ocean Sciences, I sailed deep into the North Pacific Gyre in the summer of 2009, and just this winter I crossed the Atlantic in search of aquatic trash – and found it.

It was much less of a challenge than expected to gather enough tiny plastic pieces from each sampling site for our group to study a variety of aspects including their release of organic molecules into the ocean, their assimilation into the marine foodweb, and bacteria degrading their surfaces. We are still processing samples from the recent cruise, but a potential outcome may be finding unusual anaerobic microbes living where debris accumulates. These microbes could help destroy toxic chemicals on land or digest waste materials, such as sewage, as a source of energy and clean water. 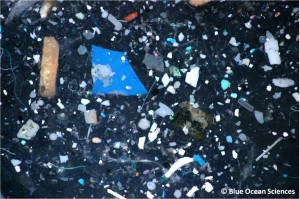 In addition to a number of research questions that have not yet been answered, the next logical step is to devise economically and politically practical solutions to curb plastic input to the ocean. To get a feeling for aspects of this problem that other scientists, advocates and educators are studying, check out a small sample of sites dedicated to the problem of plastic in the ocean:

Charles Moore, who started the Algalita Marine Research Foundation, was one of the first people to appreciate the problem of marine debris after sailing through the North Pacific Gyre in 1997.

Three engineers from the University of Victoria sailed around the world over three years to document debris and raise awareness at a community-level after founding Ocean Gybe. 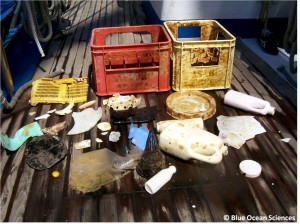 And there are a number of other organizations working towards a solution for the marine debris problem. But one of the most valuable things that each of us can do is reduce our plastic consumption every day to keep scenes like this out of the ocean.